Review: Nights With Him by Lauren Blakely 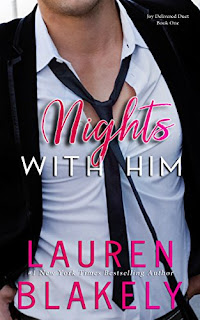 A sensual and smoldering standalone romance novel from #1 NYT Bestseller Lauren Blakely!
An extremely eligible bachelor in New York, Jack Sullivan is the total package, handsome as hell, rich as sin, and charming as anything.
But the powerful and successful sex toy CEO has commitment issues a mile-long after the tragic way his relationship with his fiancée ended.
He's looking for a way to erase the pain and that arrives in the form of Michelle Milo. From her pencil skirts to her high heels, she's his perfect fantasy, especially since she doesn't have room for anything more in her life.
When Jack proposes a deal - share her nights with him for thirty days of exquisite pleasure, then they walk away, his proposition sounds blissful.
And it is full of bliss and ecstasy, until trouble from the past threatens their present arrangement...

Jack and Michelle are a pretty dynamic couple. And this book is HOT! These two steam up the pages right from the start and they don't stop until the last page.

He runs a sex toy business with his sister and she is an intimate relations therapist. Their professions mean that neither shy away from sex and are open to just about anything in the bedroom.

I have to be honest and say there was almost too much sex for me in the book. There were some scenes I thought would have worked better if they were fade to black verses a written out sex scene, but on the flip side all the sex scenes were spicy and sometimes a bit kinky.

The story flowed well and I really liked all the characters, including the supporting ones. They were all easy to relate to and well rounded. The conflict in the story was realistic and I didn't find any major editing or plot issues in the book.

I would highly recommend this to anyone who is looking for a spicy romance read. 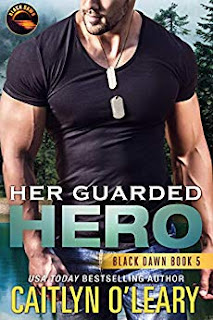 Can He Save Her Life? Can She Save His Soul?

Navy SEAL Dalton Sullivan, once again, seeks solace in the wilderness. As he treks through the forests surrounding Lake Tahoe shots ring out, and he watches in horror as a woman is thrown off her horse and lands unconscious at his feet.

Aurora Chance has no idea why someone wants her dead. When Dalton offers to keep her safe, she is pressured by her family to accept his help. As the danger intensifies, Dalton becomes her safe harbor. Meanwhile Dalton wrestles with demons from his past as Aurora becomes a beacon of hope that he knows he doesn’t deserve.

Will Dalton have to give up his life in order to save Aurora? Will Aurora survive and prove to Dalton he can trust her with his heart?

Her Guarded Hero will take you on an emotional, action-packed read that will leave you craving more. Don’t miss out, one-click this story today.

This story opens with a bang. Literally.

Dalton is on leave from his duties as a SEAL, and while hiking int he woods he hears a gun shot. But it isn't aimed at him. It's aimed at a woman on horseback.

This situation throws Dalton and Aurora together. He's convinced that the shots were no accident and is determined to protect her.

Dalton's backstory was flushed out well by the author. He was leery about getting into a relationship and once the reasoning is revealed, it makes sense as to why he's cautious.

Aurora is sort of a 'horse whisperer'. Her specialty is taking in abused horses and rehabilitating them. She has a calming way about her, which Dalton needs.

I also enjoyed getting to know her grandfather. He was a character in and of himself.

Aurora made a really stupid decision in the story. I get why she did it, so it wasn't completely out of character, but it was stupid nonetheless.

Would I recommend this book?

Yes! If you like contemporary romance, especially military romance,  you should enjoy this story.

Kyle and Janey Are Coming! 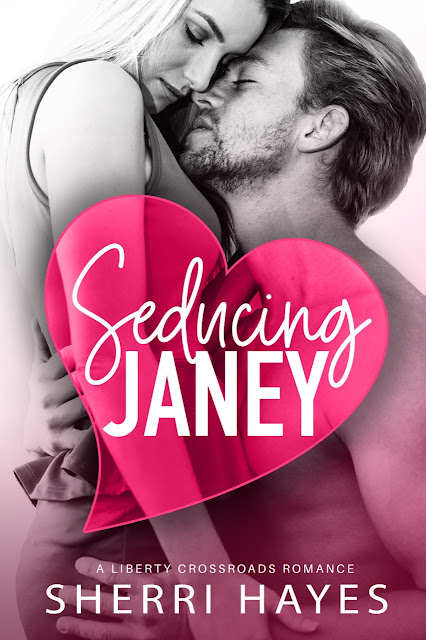 
Can he keep his hands off her long enough to catch a killer?Detective Janey Davis is trying to find a killer. When another body turns up outside the small town of Liberty, Indiana, she’s sent to investigate. Nothing prepares her for what she finds there...and it has nothing to do with the case she’s working on. It’s the deputy who’s been assigned to tag along on her investigation.Kyle Reed has been a sheriff’s deputy since returning from the Army ten years ago. He loves his job and the small town of Liberty, which is why he’s determined to help Detective Davis find out who murdered a man and dumped his body on the side of a country road. What he wasn’t prepared for was the undeniable chemistry between them.After convincing her to attend a get-together with him at a friend’s farm, Kyle and Janey give in to their passion. The problem is, he doesn’t want just one night. Can he convince her to give a relationship between them a chance? 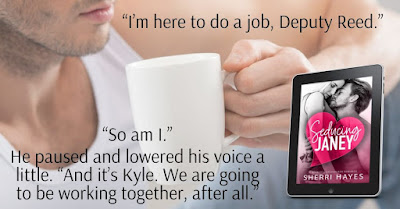 Posted by Sherri Hayes at 11:39 AM No comments:

Can she fulfill her master's final command? #SixSentenceSunday #MilitaryRomance

Grace took a shaky breath, opened her car door, and placed her feet on the pavement. Each step she took toward the brick building felt heavier than the one before. She felt naked. Exposed. And utterly terrified. It was the first time she’d been without her collar for almost ten years.

Longing for His Kiss 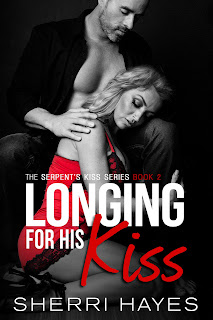 Eight months ago, two uniformed men showed up at Grace Martin’s door and told her that her husband wasn’t coming home. She’s tried to move on, but nothing will make that ache in her chest go away. Kurt wasn’t only her husband. He was also her Master. With him gone a part of her is missing and she has no idea how, or even if, she can repair the hole that has been left.
A lot has changed in the last eight months for Alexander Greco. He was injured, spent six months in a VA hospital recovering, was discharged from the Army after ten years of service, and then moved himself halfway across the country to find his friend’s widow. He has a letter to deliver to Grace—her husband’s final goodbye.
Little does either of them know the letter contains something that will change both their lives.

Posted by Sherri Hayes at 12:30 AM No comments:

“I understand.” His voice was smooth, and it sent tingles down her spine. This was not good.

Burning for Her Kiss 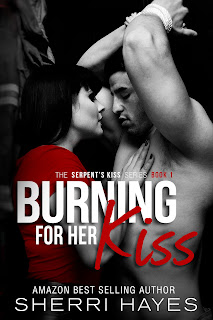 Beth Davenport has no interest in getting involved with another man for the foreseeable future. To say her last relationship ended in disaster would be a colossal understatement. The only reason she agrees to put in an appearance at Serpent’s Kiss, a private kink club in downtown St. Louis, is because her best friend, Nicole, won’t quit nagging her. When she walks in the door that night, the last thing she expects to do is meet a man who will have her reconsidering her ban on men.
As a captain with the St. Louis Fire Department, Drew Parker is used to being in charge. His crew relies on him to make sure they know what they’re doing and return home to their families after every shift. It isn’t, however, what he wants in a relationship. Drew decides to join Serpent’s Kiss to see if what appeals to him in fantasy is something he wants to explore in the real world. He’s also hoping that he’ll be lucky enough to meet a woman with whom he can explore his desires. The night Beth walks into the club, he is intrigued. Drew has to get to know her better.
After what happened to her, Beth is reluctant to get involved with Drew. It doesn’t matter that he is sweet and charming. She’s been burned before and Beth doesn’t think she can survive having her heart crushed again. Drew, however, won’t take no for an answer. He wants a relationship and is determined to chip away at her defenses until she relents. Will she give him a chance, or did her ex leave her with scars too deep to heal?

His head and bare shoulders were visible above the water as his arms moved fluidly over his head and down into the water. He was a confident swimmer and obviously in shape. The sun was still making its way up into the sky, but there was enough light for her to see the well-toned muscles tense and flex as he moved through the water. She felt something as she watched him but quickly suppressed it. The man was a pampered athlete who was used to women falling at his feet. Attractive or not, there was no way she was becoming another notch on his belt. 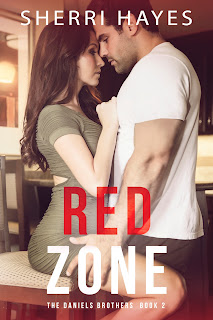 The only thing Rebecca Carson ever wanted to do was join the FBI. Now, that was in danger because of a situation, of which she’d had little control. So when her ex-partner and mentor, Travis Hansen, calls and offers her an opportunity to help him with a job, she jumps at the chance.
Gage Daniels has made a pretty good life for himself. As a professional football player, all he has to do is ask, and most things are made available to him. This includes women. A well timed smile is usually all it takes to attract the opposite sex, especially in Nashville.
When a stalker threatens Gage, the team owner calls an old friend to help protect his star quarterback. Rebecca must work to protect Gage while staving off his advances. The last thing she wants is to be another notch on a hot shot athlete’s belt.

#SixSentenceSunday from Welcome to Serpent's Kiss by Sherri Hayes

Ascending the stairs, she entered the first room on her right. All the rooms on the second floor had been turned into playrooms. Each were well equipped with a variety of toys that could be adapted to specific needs if the situation arose. She’d tried to make things as versatile as possible.

Kneeling on the floor in the middle of the room was Ryan. As per her instructions, and their arrangement, he was waiting for her naked. 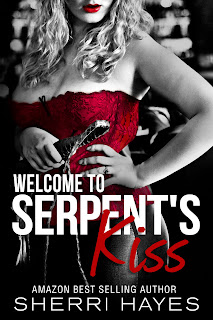 After losing her husband unexpectedly, Katrina Mayer decided to open Serpent’s Kiss. She wanted it to be a place where she and her fellow kinksters could play and socialize.
Five years after the doors opened, the club is everything she’d hoped it would be. On Friday and Saturday nights, Serpent’s Kiss is filled with men and women who share a similar desire to explore the pleasures BDSM has to offer. The club has continued to grow, and over the years, many of its members have become friends.
The one thing Katrina didn’t expect when she’d decided to open a club was the human drama that came with it. Learning to balance her life as the club mistress has taken some getting used to, but she wouldn’t change a thing.

Tangled in His Embrace 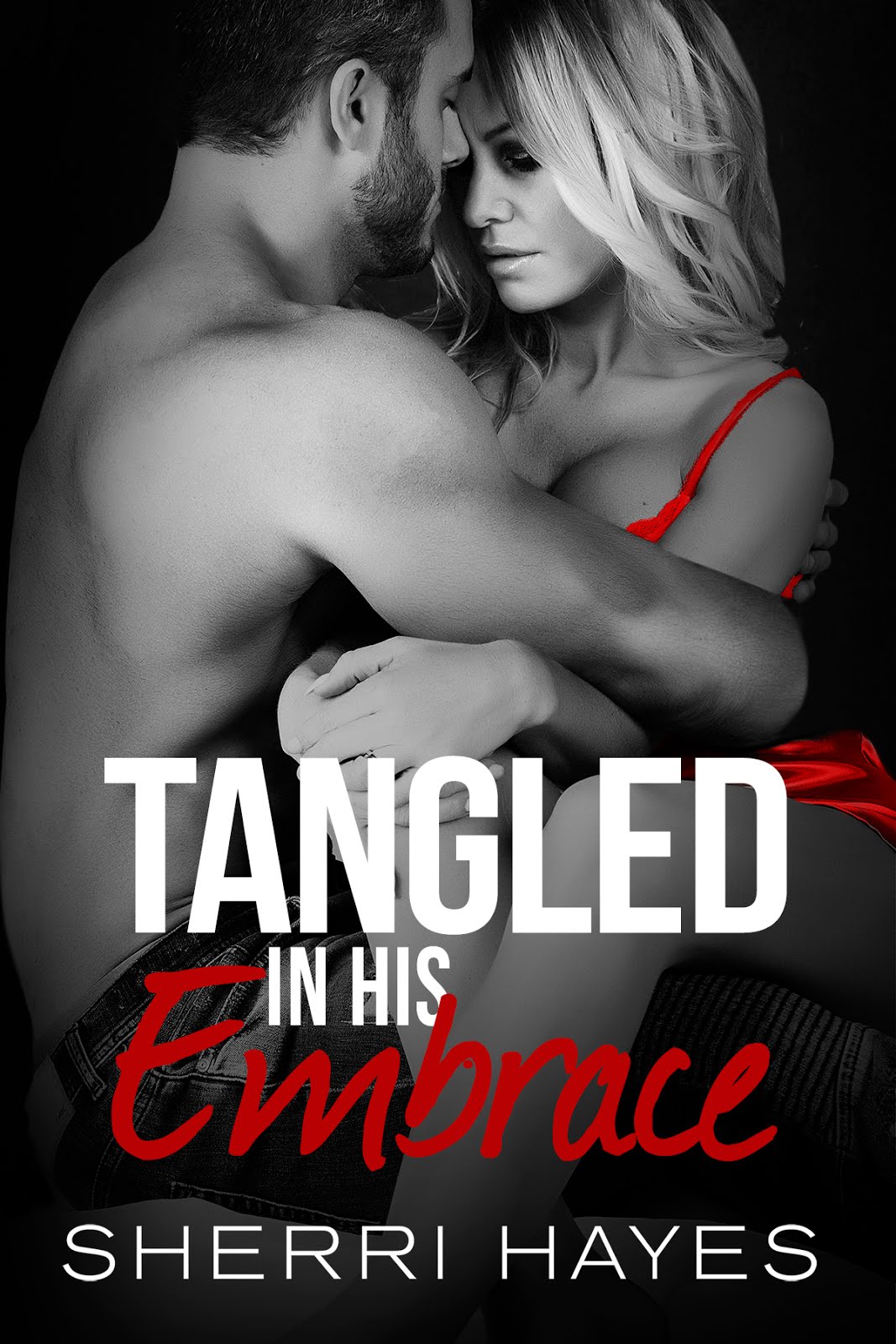 Tangled in His Embrace

Longing for His Kiss 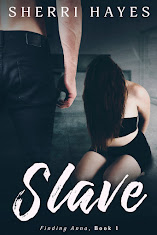 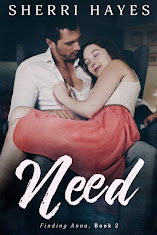 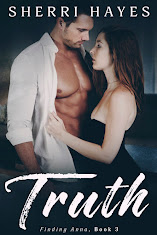 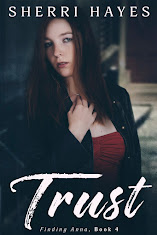 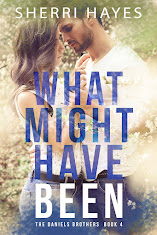 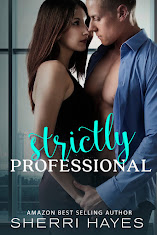 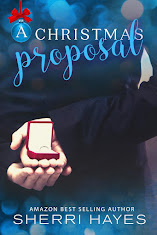 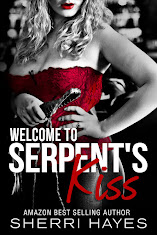 Burning For Her Kiss 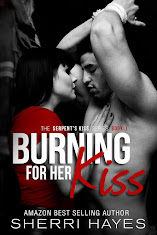 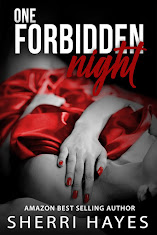